After discovering that this is a game challenge I quickly stopped doing everything else and jumped onboard!

This is a little 2D game in which you control a pirate. Apparently the goal is to find a lost bottle but we will completly ignore that for our exploit.

We were the first team to automate this and ended up getting the most points out of the challenge.

Running the client & figuring out the controls

The first step was to figure out how to actually play the game. It came with a python client based on the arcade library. I wasted a long time trying to figure out how to run this on my linux VM. The game would start but only show a blank screen. Fortunatly there was this troubleshooting section:

So I just started doing everything right and ran the game on Windows.

Next up was to figure out which controls were available. While the documentation lists 9 remarkable features of this game, it unfortunatly doesn’t list the controls. Reading the client source code brought them to light:

These are things we can do in the game:

Searching for the bug

This password feature is suspicious. Where does such a boat bring us? Time to analyze the map format. For that I downloaded a random map from our Vulnbox (luckily it is easily readable JSON). A map consists of a dictionary of rooms. Each room has a list of exits. Each exit references another room and has a keypad entry, which is either empty or contains the necessary password. 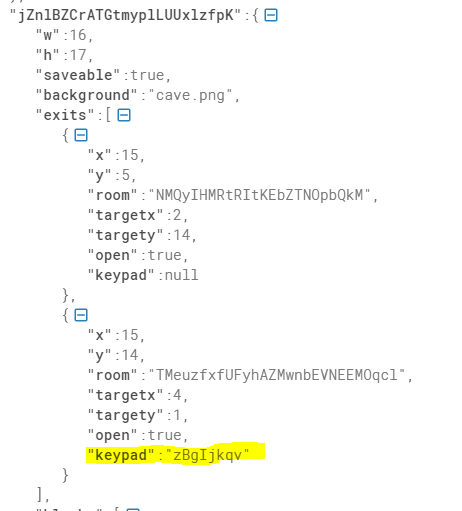 Additionally each room has a list of elements. There seem to be different types of these. Elements with id=1 contain a flag. The same flag is also contained in a dream, which can be unlocked after drinking a lot of rum.

Bug idea 1: Maybe the password is stored inside the save that we can download. That would allow us to go through the locked doors behind which a flag is probably hidden.

To test this idea we download a save and look at it. Unfortunatly it turns out that the save is a very stripped down version of the map without the password.

Bug idea 2: Maybe we can modify the save and change the ID of the room we are currently in to a room with a flag element inside.

This also does not work. The game complains that you can only start in “saveable” rooms. We can modify this attribute in the save however! Let’s make all rooms savable and load our state! Still the same error. Weird. Time to read the server source.

As it turns out, when loading a save the server loads the original level from its own storage and merges it with the savestate.

During merging our fake “saveable” attributes are ignored.

Bug idea 3: This merging functionality seems extremly suspicious. Maybe there are other attributes that we can overwrite?

Quickly I found this code:

Actual bug: When merging the exits of a room all keypad entries will be overwritten with None, removing the password protection!

Quickly testing this in the game confirms the bug and reveals that we can find a sign in the new room revealing the flag when interacting. Awesome!

The goal is to write a script that does the following:

Thankfully, in this case, automating these steps is releatively easy. We can steal all the functionality from the client to communicate different actions with the server. The only difficult part is to write an (efficient) algorithm that goes through all exits until a flag is found. At least movement is client-side, so we can always just pretend that we are standing on an exit without having to actually move there.

The idea for the (somewhat) efficient exit traversal algorithm is the following: We want to keep track of which exits we have already tried in which room, to make sure that we explore all of them. If all exits have been used already we select a random exit to use. This algorithm is not perfect but seemed good enough for the small levels.

We use a dictionary where the keys are hashes of a rooms JSON string (since the server does not provide room IDs) and the values are lists of exit positions.

The patch is very straighforward. Replace line 144 in entities.py.

Thank you to the author(s) for this very fun challenge! My guess is that there is a second bug connected to drinking run and getting the flag from the dream.